Editor’s note: this article was originally based on this tweet thread from July 9th 2020. Since then, we have learned that the Portland Police’s press releases were riddled with errors, and with new research tools available, we are in the middle of recompiling the data using court records. This process is more time consuming, but once it is done, it will allow more accurate representation of the charges and the processes being used against these protesters.

So, I’ve gone ahead and scraped the current arrest data as best I can for the protests, and finding a few bits of interest. As of time of writing (after the second arson suspect was arrested), there were 348 people cited/arrested with a rough total of 675 charges (number is a bit low because I did not add the few duplicate charges some people got, but that’s only by like 5-6 charges), so on average each person got 2 charges.
Breaking the charges apart into felonies and misdemeanors, 75% (512) were misdemeanors, and 19% were felonies (130). The remaining 5% (33) are charges that I don’t have penalty levels for at this time, mostly city curfew violations from the early days of the protests. 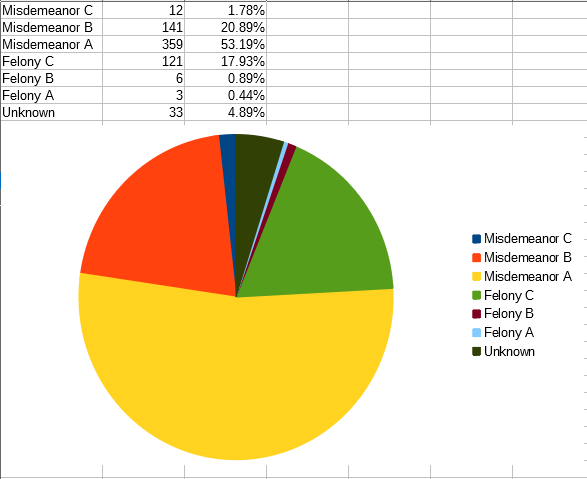 Next I looked at categories of the charges. Unsurprisingly to me, the vast majority of charges were against the state/justice system (‘fuck the police’ mentality) with 44% (294 charges) related to that section of the ORS. The next highest was ‘offenses against public order’, essentially violations of the social construct. This section involves firearm charges, disorderly conduct and riot. This section was an additional 33% (220 charges). Another thing that I suspected, but it’s good to have the data back up, is that offenses against persons (assault, mostly against police officers) and offenses against property (theft and burglary) together only accounted for 15% (99) of these charges. 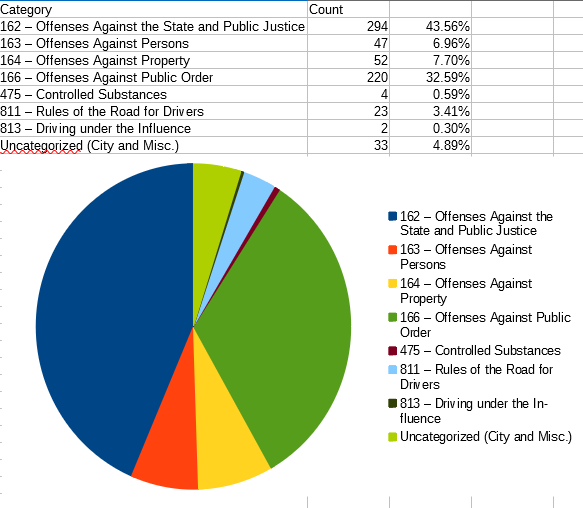 When looking at individual types of crimes, the top five were as follows:

So now that we see what the biggest drivers of charges are, let’s look at the when.

Interfering with a Peace Officer

At the core, it’s essentially anytime you keep a cop from doing his job. That charge comes in spikes. 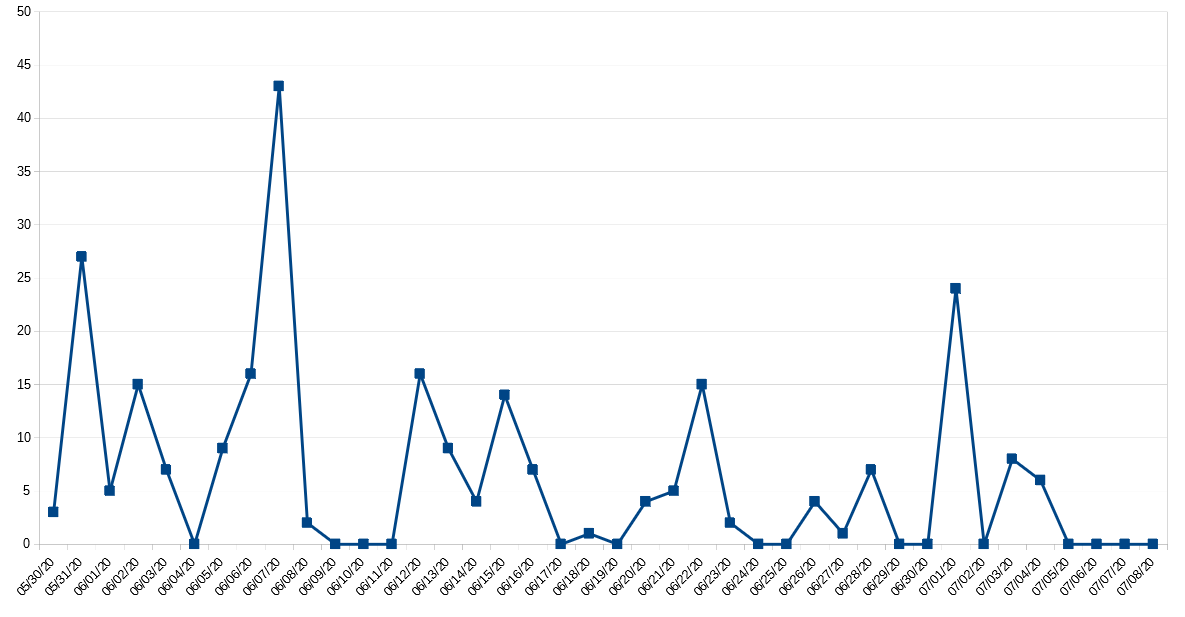 Disorderly Conduct in the Second Degree

Almost every time I see this charge used, it’s with or in place of Interfering with a Peace Officer, and is one of the ‘offenses against public order’ charges. 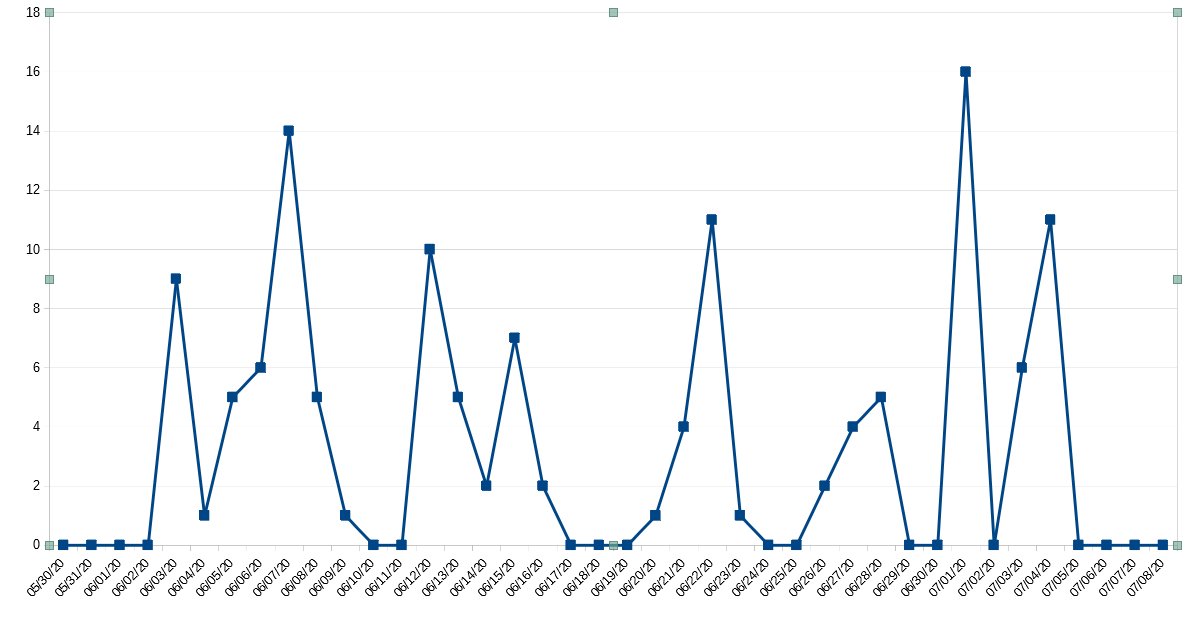 Laying them on top of each other (IPO in orange) makes it clearer how much overlap there is. 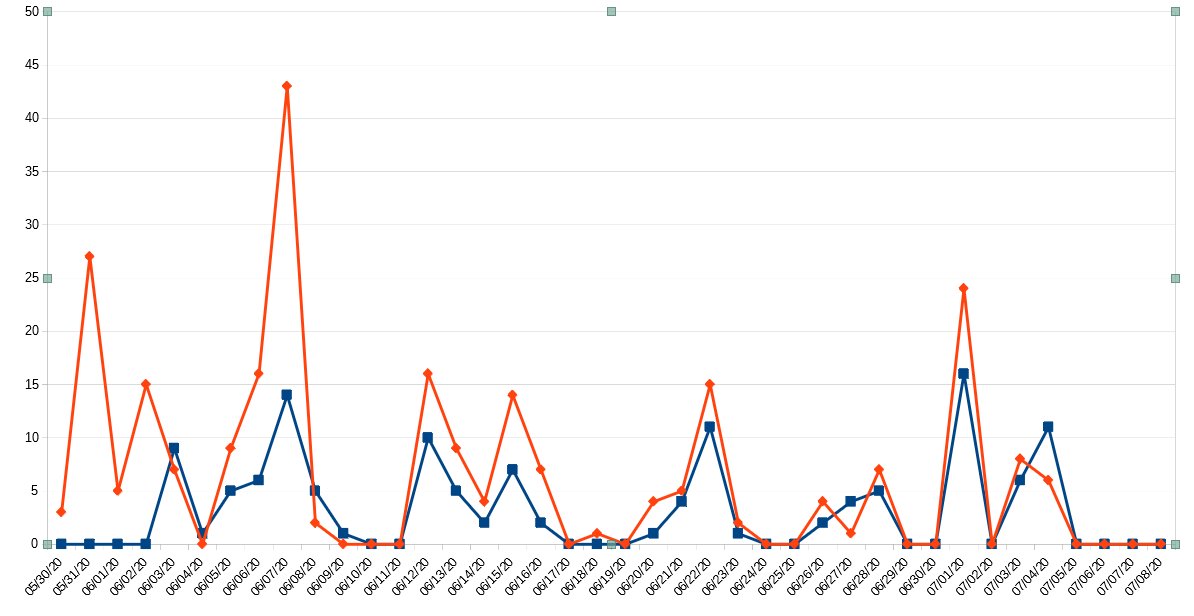 Third up is Riot, an offense against public order, and the one most often cited as what’s wrong with this protest (along with looting, which doesn’t even make the top 5). This chart shows it is highly centered around the first two nights of protests, with a second spike the night the protesters marched on the Portland Police Association headquarters and the police responded with a huge presence and gassed an entire neighborhood (something we still haven’t heard the last of yet) (Editor’s note: Since the data is only current in this article as of the 8th of July, we expect to see an uptick in riot charges in the days going forward. The reason is two-fold. In the Don’t Shoot PDX v. City of Portland federal case, a temporary restraining order limits use of tear gas to threats to public safety. Additionally, on June 30th, Gov. Brown signed House Bill 4208 which restricted the use of tear gas to instances of riot. Within hours of that law being signed, police declared a riot against peaceful protesters outside the Portland Police Association’s offices (the Police Union). This matches the uptick that night on the following chart) 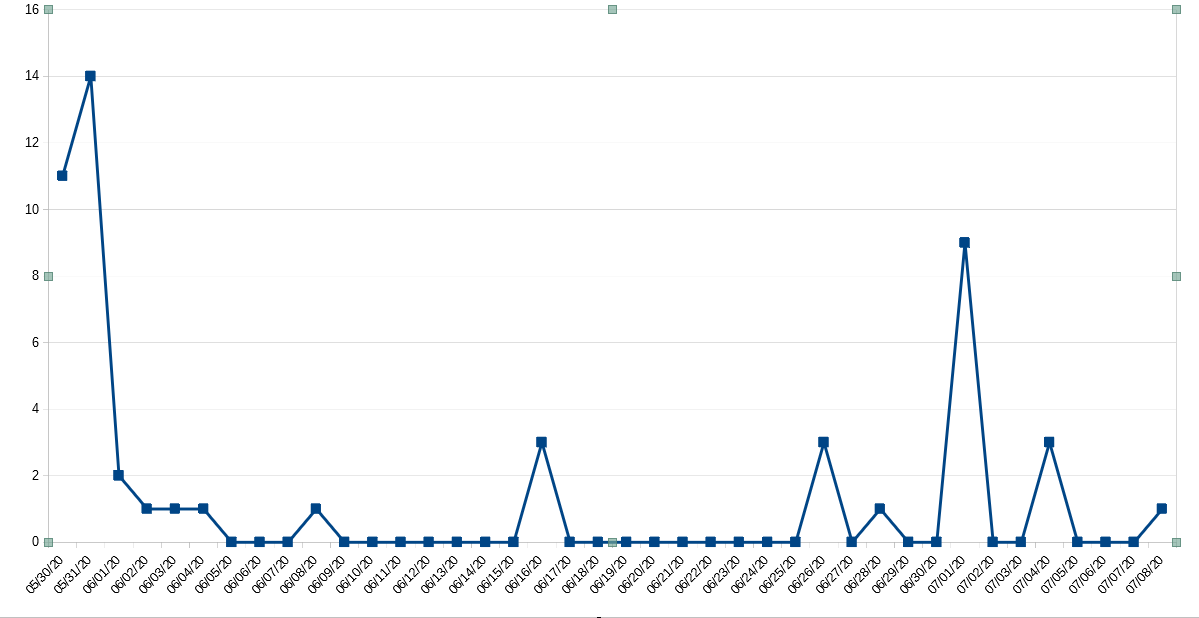 Resisting arrest
Number 4 on the list is resisting arrest. This is really any kind of ‘active resistance’ to being arrested, no matter the provocation. Get kicked in the nethers, or have an injury that causes you to struggle? That’s where this charge can come from.

Combined with the Interfering with a Peace Officer and Disorderly 2 charges earlier, you can see where arrests naturally drive resisting arrest numbers. Which also means one person, just in the act of getting arrested, could get three charges stemming from the same alleged crime. 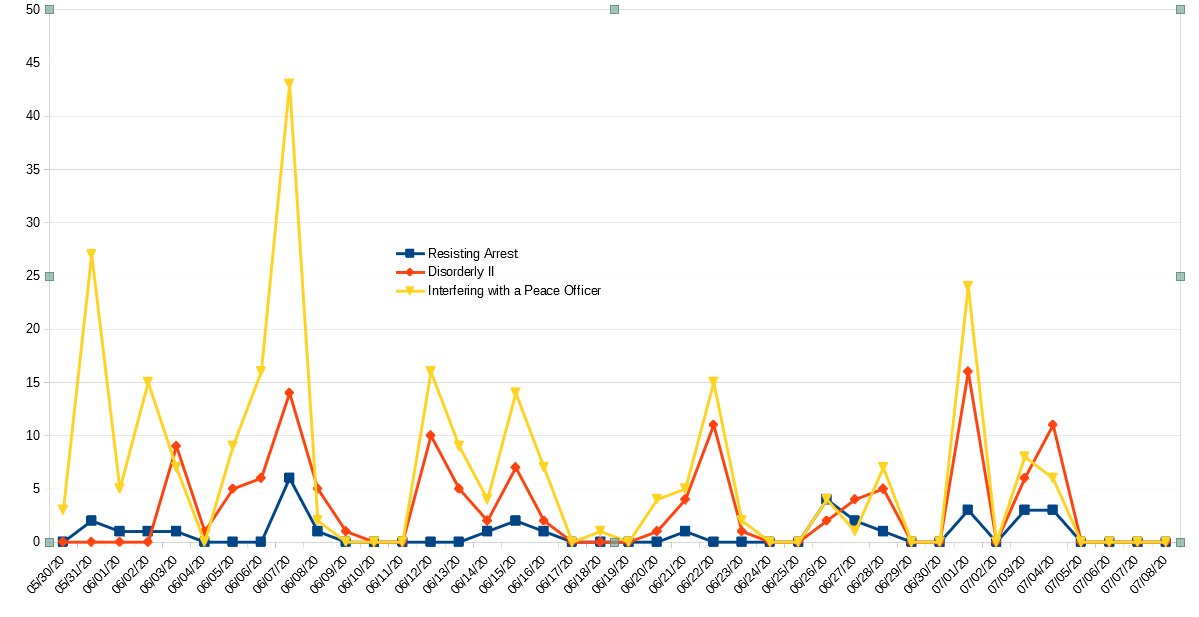 Arrests/citations for curfew violations all happened on the same night, the second night of protests, and from my memory, the first night the Mayor declared a curfew. The fact that one night was enough to put it in the top 5 of charges shows how much of the charges were limitedto early protests and the incident at the PPA building.
So, what does this all mean?
It’s hard to say for sure. There’s still a lot of variables. Charges can be dismissed or reduced, charges do not necessarily equate the number of people committing criminal acts, just the ones caught. The numbers also don’t show interactions with juveniles, of which a handful are mentioned, but by necessity, their records are protected.
What I do see though, from my perspective, is telling.
1) The claims that protests are hurting businesses seems to be propaganda. Businesses were already hurting from Covid-19 closures, and most of the property related crimes happened in the early days of the protests before Multnomah County entered reopening. Additionally, most businesses in the areas where protests happen are often closed for the day normally before protests ramp up (by about 10pm)
2) The vast majority of crimes are against the social contract that many claim has been broken already by the police, or against the systems of government that the people are angry with to begin with
3) Charges seem to be largely related to actions taken directly by the police (interference, resisting arrest, and so on), not protesters going out and smashing things.
4) While there is an ebb and flow to both police and protester tactics, it appears to me that the nights with the less charges are the nights when the police took a more hands-off approach. This backs up numerous reports of those on the ground who say that protests were entirely peaceful until police arrived in riot gear, looking intimidating. At that point any small escalation would be met with riotous escalations by local police officers.
The last few days have very sparse data, but that is mostly due to a lack of press releases from PPB, and likely related to the sudden change of tactics by federal forces making charges from the Federal Courthouse, with federal arrests and charges.

If Roe vs Wade is overturned then abortion does in fact automatically become illegal in up to eighteen states, who, today, have unenforceable bans on abortion in their state laws. https://en.m.wikipedia.org/wiki/Trigger_law https://twitter.com/inezfeltscher/status/1307691794411458560

Every time it’s SCOTUS confirmation time I feel the need to report that abortion will not become illegal with the overturning of Roe v. Wade. The states would merely regain their powers to put the question to the democratic process.

At the time I seem to recall thinking "Neat ... wonder if they'll mean it ..." and as I recall hours later the same riot line was gassing the same protesters. Wonder if Brent Taylor was in that photo

For years @Right2HealthUS 's founder/director #LeslieGregory has been demanding that health institutions declare #racismapublichealthcrisis. Thank you @sarah2020 for inviting Leslie to lay out the "whys" AND supporting this effort!

Has anyone seen one of these where the algorithm -wasn't- a racist fuck?

I wonder if Twitter does this to fictional characters too.

A Washington tattoo artist is offering offering cover-up work to people who have changed their minds and their hearts, and now need help changing what's on their skin.